It all began in early April, we never intended on changing the boat, we'd brought a lovely drascombe Lugger last year, and the children had really taken to it, enjoying days out from Itchenor in Chichester Harbour, and also a camping weekend down in Poole. I was slowly getting the Lugger ready for the coming season, and had a list of changes I wanted to make to her. 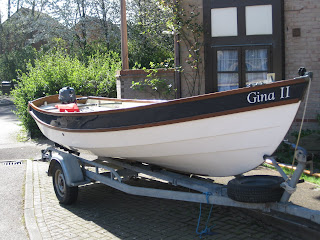 We'd fallen in love with a Baycrusier 23 at the Southampton boat show back in September, but as they were only available new, and out of our immediate price range. The attraction of the Baycruiser was that she was stable, and trailable. This coupled with some of Matt Newlands excellent design features means it is a lovely package.

Having lived with the Lugger for a season, we had a couple of issues with the Luggers design. I know many see them as a "classic" however the design has not been evolved at all in the last 30 years. This I feel is its biggest downfall. The biggest concern we had was with the rudder; on a Drascombe, it’s a huge piece of metalwork, with a large swinging plate on a long metal pole which fits through the hull, and on the end is the tiller.

This design means it’s hard to come into shallow water, as the board swings up you cannot remove it from the slot in the rear deck. If you do choose to remove it, you end up with a very heavy arrangement to ship. I know many Drascombe lovers say that you can put a block of wood under it in the slot, and then tie the tiller up on the rear mast, but this is still a very clumsy arrangement. I did give some thought as to how you could modify this arrangement, but it would have needed serious surgery. Coupled with its less than sparkling sailing performance, it never made it the perfect boat for me.

I was having a cheeky look around at what other boats might be available, we'd nearly brought a Moody 29 last year, but it had the dreaded osmosis, so we left it. I spotted a Seal 22 on Boats and Outboards, and got thinking about how it might be the right sort of boat for us, good reputation, lifting keel etc. But if we wanted to sleep on it, it would only really be good for 4 people.

I'd looked at a Super Seal 26 on Yachtsnet, and it seemed ideal, slept 5, good performance, lifting keel. The Super Seal was built for about 3 years in the late 70's, and many examples are showing their age. I spotted our boat on Apollo duck, and we discussed the merits, and from the pictures it looked right, and most importantly cared for. 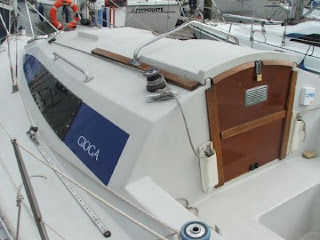 So off we went to Canvey Island to take a look. She was definitely "end of season" but only really suffering from lack of cleaning and paint and polish. Inside was really tidy, outside was in remarkable condition, especially for a thirty year old vessel. We discovered that she'd been brought originally by the owner of Tiptree Jam, and for most of her life was kept in the warehouse there, which explained her condition. I think I was beaming like a Cheshire cat, and Jan seemed to like it too. We spent the afternoon pondering an offer, and reading the last survey.

When we got home, we made an offer and it was accepted, rightly or wrongly we'd decided not to make it subject to survey, as having been over it was a toothcomb, we couldn't find anything too much wrong with it; The Super Seal is a very simple boat:- No keel bolts, inboard engine, hot water, or other complexities of modern yachts. The interior woodwork is all Teak; something you'd never see on a boat now! 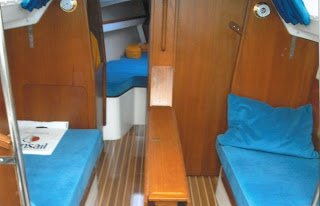 So we spent the next few weeks running up and down to Essex, we completed the purchase on Maundy Thursday. We then spent Good Friday and Easter Sunday antifouling and cleaning. 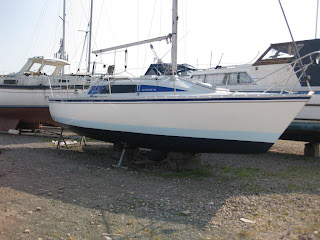 We'd debated where to keep her, I first off thought it may be interesting to keep her on the east coast, certainly the cost of moorings and yards is tiny compared to the south coast, but the lack of access and small tidal windows was a real put off. So finally we decided to move her back to Chichester. One of the big advantages of a lifting keel is the mooring options it opens up to you, Keel up the Seal draws about 18inches, and keel down around 5.5 feet. Thanks to the Chichester Conservancy, affordable moorings are available around the harbour, even more so if you can take the ground.

The final piece of the jigsaw was to get her moved south. I did contemplate sailing her round, but time was going to be an issue, along with availability of suitable crew. So I decided to investigate road movements. I found a couple of adverts, and eventually chose Chris at boat towing in Southampton.

His service was excellent, he put up with all my emails, and daft questions, and even the agro from the Yard on Canvey Island. We'd naively presumed that it would be easy to book a slot to get the boat lifted in, but a few phone calls later and it was clear that we'd missed one important detail, that most people don't launch until the beginning of May, and therefore we should have booked this months ago. We racked our brains and called around a few yards we knew. We came up trumps with Emsworth Yacht harbour, they could slot us in, but only if we were there by 10:30 Phew! 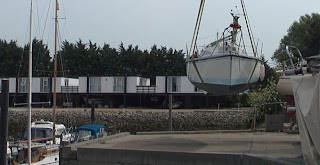 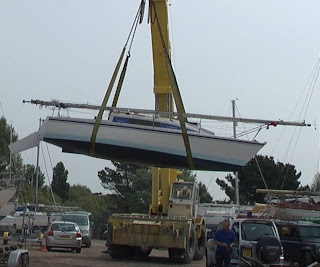 So finally Friday morning came, it was a very stressful time from my perspective, was everything ready, I'd taken the mast down a week earlier, and now I was to put it back up for the first time. But Emsworth handled everything really well, I always think that these are stressful times for the yards, lifting and moving boats with owners present must be a nightmare!

Everything in place, we launched around 11:30, and the mast was up around lunchtime. We moved her to the other end of the marina and got ourselves organised for the trip out to the mooring, finally setting off around 3:30.

We motored out of Emsworth, and got the genoa out on the way, she happily did 5 knots under genoa, I was really pleased.

We picked up the mooring first time (hooray for team work!) I'd originally thought we'd go back to Emsworth in the tender, but the little engine was not happy, and with the sea breeze filling in, it would be a very wet 2 mile ride back. We'd chosen this mooring due to its proximity to Northney, so we pumped up the tender and made the short, but very soggy journey over to Northney. They kindly organised us a taxi, so we deflated the tender, tried to make ourselves look presentable and shoved the tender in its bag. All in all a very long but good day.
Posted by Daniel at 11:53

This blog is about Stargazy, our first leap into bigger boat ownership.

I've been sailing for around 30 years now, and have sailed in various dinghies (Topper, Enterprise, Wanderer, Comet, Miracle, among others!) and also on various Yachts.

I've sailed mainly on the south coast of the UK; Chichester Harbour, the Solent and Poole all being favourites. My first steps afloat were taken on the Norfolk Broads, somewhere still dear to my heart.

Before we had children (BC!) Jan and I did some bare boat charter in Greece and Turkey with friends. I've also sailed to the Channel Islands and on various boats in the Solent.

Our focus now is on family sailing with our son and two daughters. Time will tell if they have salt water in their veins!

Daniel
I'm an IT Director, having worked in Software development for over 15 years. I run a software development company, working with a variety of organisations helping them to achieve their business goals through the use of IT. I'm married with 3 children and live in Sussex.